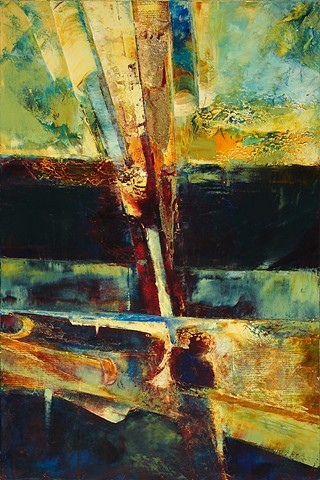 "And they sang a new song, saying: 'You are worthy to take the scroll, and to open its seals; for You were slain, and have redeemed us to God by your blood, out of every tribe and tongue and people and nation, and have made us a kingdom, priests to our God; And we shall […] Revelation

The God who is the Alpha and the Omega has opened the seventh seal. The scroll signifies the unfolding of human history. Redemption is complete. He wears the victor's crown of laurel leaves as He talks with his bride. Above another scroll is being unfurled! The heavens will be rolled back as a scroll. Revelation 6:14.

The cross dividing the painting, is split in two by Christ who brings heaven and earth together. He is called The Word of God so I incorporated three sections of text from the Scriptures. The first at the top is the doxology from Jude 1:24-25. It is partially visible above the central slash of glory. "Now to Him who is able to keep you from stumbling, and to make you stand in the presence of His glory blameless and with great joy, to the only God, Our Savior, through Jesus Christ our Lord, be glory, majesty, dominion and authority, before all time and now and forevermore."

The second text is from Revelation 1:4-7, partially visible in the scroll to the left of the figure at the bottom: "Grace to you and peace, from Him who is and who was and who is to come, and from the seven Spirits who are before His throne, and from Jesus Christ, the faithful witness, the firstborn from the dead, and the ruler of the kings of the earth. To Him who loves us and released us from our sins by His blood—and He has made us to be a kingdom, priests to His God and Father—to Him be the glory and dominion forever and ever. Amen. Behold He is coming in the clouds and every eye will see Him."

The third text from the book of Psalms. It is embedded on the right. Psalm 71 "... O God, do not forsake me, until I declare Your strength to this generation, Your power to all who are to come, for Your righteousness O God reaches to the heavens, You who have done great things O God, who is like You?" (Psalm 71:18-19) The texts are partly hidden, like the mystery of Christ in us and the Incarnation itself, the true mystery of Christ in all His glory will be revealed at the last day when he opens the scroll's seventh seal. Then Jesus will end “His-Story.”

Above are the heavens and future glory when “the heavens will be rolled back as a scroll.” The kingdom of the world will become the kingdom of our Lord and of His Christ; and He will reign forever and ever . . . . We give You thanks, O Lord God, the Almighty, who are and who were, because You have taken Your great power and have begun to reign . . . and the temple of God which is in heaven was opened. (Revelation 11:15ff,).