The seed metaphor finds its full and rich meaning in the death and resurrection of Christ. Here in a garden, which is considered to be a sacred space or a place of peace and rest, Jesus in a seed-like position, is preparing to die. Ironically the garden is the place of his crushing. The Mount of Olives, where the Garden of Gethsemane was located, was so named because of the Gethsemane (Gk) oil press, the largest and final stone used to extract the purest olive oil. In this painting, Jesus is bowed like an olive prepared for crushing. His soul is deeply grieved to the point of death. “He knelt down and began to pray, saying, “Father if You are willing, remove this cup from Me; yet not My will, but yours be done. …and being in agony He was praying very fervently and His sweat became like drops of blood, falling down upon the ground,” (Luke 22:41 ff).

This painting is an exception to my earlier portrayals of Christ's crucifixion, which have been more abstract and expressive. Or methaphorical images such as The Seed, The Word, The Pearl, etc. But Christ walked this earth as a man. His Incarnation is the climax of history that must not be ignored. But is it not possible to paint Jesus Christ giving Him the glory and honor and power that He deserves. Isaiah wrote in chapter 53, “He had no stately form or majesty that we should look upon Him, nor appearance that we should be attracted to Him. He was despised and forsaken of men, a man of sorrows and acquainted with grief; And like one from whom men hide their face.” He was not one who stood out in a crowd. He was a broken, despised and crushed. A suffering servant. 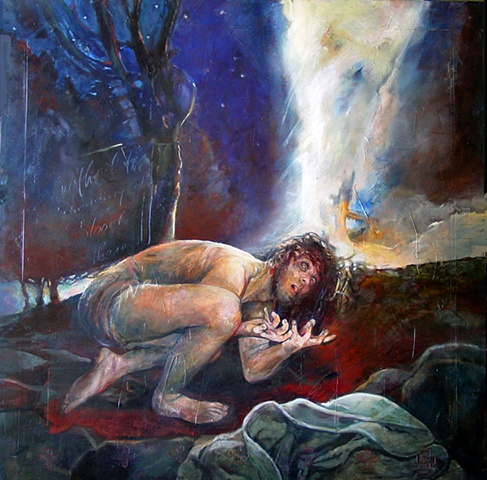