The metaphorical V-shape of the tearing veil is God’s fulcrum from heaven. Jesus Christ, the second person of the Trinity, entered time and space as a small helpless babe, but his Incarnation and death destroyed “the dividing wall” between God and man. Christ is depicted as the Lion and the Lamb, the King and the Shepherd. The title is taken from Genesis 49: 10: “The scepter (judge’s staff) shall not depart from Judah until the One comes to whom it belongs. And to Him shall be the obedience of the peoples….” The scepter symbolizes the justice and authority of a king, but it also resembles a shepherd’s crook used to lead and guide sheep.

Angels announce the birth of this Shepherd/King, while the torn veil foreshadows coming crucifixion. The blue, red, and gold palette represents not only the triune nature of God, but these primary colors also bear witness to God himself. “These three bear witness, the water, the blood, and the spirit.” 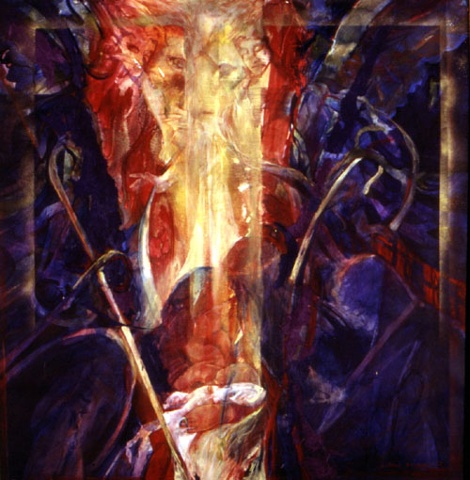